Bealtaine (May Day) from The Way of the Seabhean 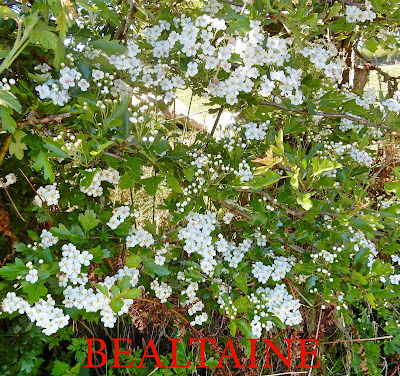 Bealtaine , 1st May, is the first day of summer. The goddess who presides over Bealtaine is Medb, a great earth goddess, the keeper of the land. For millennia, in Ireland, there was the tradition of the Beanfeis (the sacred marriage). A chieftain was chosen for his wisdom, kindness and fairness to the people. He lay with the priestess of Medb on Bealtaine Eve and from their union came the fertility of the land and of the people. The priestess personified the Goddess Medb. She was the land. The chieftain was making love to, and giving his sperm to, the land. Then he was head chieftain for that year. This rite of passage went on until about 300-400 AD, when Christianity came to Ireland.

Bealtaine takes us out of the darkness, celebrating the light and the communion of the people with the land. Traditionally, at the time of Bealtaine, great fires were held. The main Bealtaine fire was at the centre of Ireland, at Uisneach, which holds the essence of feminine energy, the triple energy of the maiden, mother and crone.

Bealtaine was the time of coming together for merrymaking, lovemaking and great festivities. The tribes came from the four directions and climbed the steep hill, where the celebrations began after sunset on Bealtaine eve. Couples came together at Bealtaine and the children conceived at that time were born at Imbolc and were considered sacred.

At Uisneach there is a stone called the Cat Stone with a hole underneath it. When deals were done at Bealtaine, they placed a long, tubular, musical instrument under the Cat Stone. They created sound under the stone, until the hill resounded with the energy. That deal had to be honoured and kept on pain of death, because the earth herself had heard and accepted it.

As the Bealtaine fires died down, people ran their cattle through them to cleanse them of any impurities, so they would be healthy and fertile for the summer months. Tribespeople and couples jumped over the fires. People also put clouties (pieces of material) on a hawthorn bush for good luck.

Medb is powerful, passionate and wild. In today’s world, the name Medb means wanton and hussy, because it is said that the later Medb, warrior queen of Connacht, could have thirty-two men in a night and still be found wanting.

Standing in the place of Medb, it is a time to explore and awaken our passion, whether that is sexual passion, or passion for anything else that we love to do. We have a right to pleasure. When we allow our passion to flow, we are truly alive.

Excerpts from The Way of the Seabhean by Amantha Murphy, shaman, healer and seer and Órfhlaith Ní Chonaill, scribe. This book will be published by Womancraft Publishing for Brigid's Day 2021.

Posted by Orfhlaith Ni Chonaill at 6:41 AM