Winter Solstice from The Way of the Seabhean 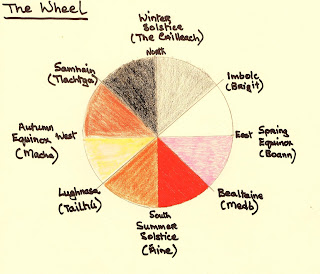 The Winter Solstice (grianstad an gheimhridh – literal translation winter sun-stop) is the day of mid-winter. It is the longest night and shortest day of the year. After this night and day, we begin to move forward towards Imbolc. It is a time for our deepest communion within ourselves.

The winter solstice is one of eight festivals on the ancient (Pre-Celtic) Wheel of the Year. It is the place of the Cailleach, the old woman, hag or crone.

Traditionally, people could not travel far around this time and so, they learnt patience as they lived in close quarters with their families. Communities congregated, to feel the safety of being together and they called upon the sun to return.

Many people kept their cattle in the cottage or rath with them and the warmth of the animals kept the people warm. Evergreens were bought in to decorate the house: holly, ivy and the mystical mistletoe. Some believed that evergreens were a place for nature spirits to rest. People prepared a feast, knowing how much would still be needed for the coming months. Food was shared with others so that those in need were taken care of. At this time, poitin, the illegal whiskey, was often ready for its first tasting. A log was decorated in honour of the Cailleach and burned, making way now for Brigit. A candle was lit and put by the window so passers-by would know they were welcome at this time. The candle also signified the returning of the light.

In Irish mythology, the souls passed over in Samhain and moved on to Tír na nÓg, the land of the forever young, to await rebirth. Their spirits became part of this earth and kept Ireland green and fertile. On the Wheel, the winter solstice is the place where the souls reside, waiting for rebirth at Imbolc. This is the place of the void, the place of the uncreated, a place of energy waiting to take form.

Often, we are frightened of being in the void, but the void is actually the place of women. We think somewhere is empty because we do not see what is there. Space is filled with energy. When we allow ourselves to sit in the void, we really embrace our power as women. We embrace all the creative magic and energy that we hold within us. Things need to be a bit foggy at first. By allowing ourselves to be in the fog and giving gratitude for the lack of clarity, the fog brings us more than we had anticipated or expected. We can put power, energy and magic into it, so that, when it clears, it will be magic.

(Excerpts from The Way of the Seabhean, a book by Amantha Murphy & Órfhlaith Ni Chonaill)

Posted by Orfhlaith Ni Chonaill at 10:41 AM